Tutorials of the game series named Yomawari: Night Alone (夜廻) and Yomawari: Midnight Shadow (深夜廻), made me dumbfounded! They are supposed to be nothing special or boring for players, but in these game series, they lead me to meet the…

Tutorials of the game series named Yomawari: Night Alone (夜廻) and Yomawari: Midnight Shadows (深夜廻), made me dumbfounded! They are supposed to be nothing special or boring for players, but in these game series, they lead me to meet the…

Before you will proceed.

I never imagine I will write a game review about tutorials before, since most games have these, to make players learn how to use buttons to command characters or use menu. Sometimes, I think it’s necessary to learn how to control character in game, but I was taught to learn what I already know, such as how to use D-pad and etc. So the horror game like Yomawari would not be different too.

For playing these two game, or watch video/screenshots for the first time, it’s no way I will expect something surprising from tutorials because they are like other tutorials in other games, teach us how to control characters or use tools/menu in game. And when I watched beautiful and unique scenery, along with super cute characters in these two games, I never doubt that I will encounter something frightening from these normal tutorials soon.

I was dumbfounded because tutorials teach how to use the first item, throwing a pebble.

In Yomawari: Night Alone, character who you will control is a little girl who is leading her dog. Tutorials will teach you how to move character and blah blah blah, until a pebble falls near her. So tutorials that have good will, they taught how to select and use this item. But the moment  when I saw the result after using that normal rock as normal tutorials said, my brain was empty… It is like I understood what happens already, but I think I accepted the result soooo slowly. That b********n confirmed it, and it showed the end of ****. And this moment is the first tragedy for the little girl. 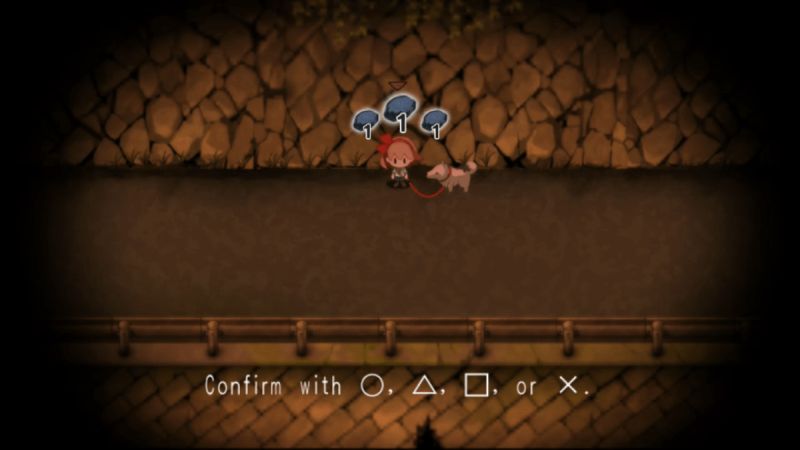 This is my own opinion, but I suspect that this rock of the destiny that falls near the little girl, might be dropped because of Hand Spirit that appeared behind the girl and dog but it ran to the forest nearby, and this forest is the upper level of the road that the girl and her dog were walking. I am not sure why that spirit ran near her, but it’s possible that it was following her and dog, until this stalker made this rock fall (intentionally or unintentionally). 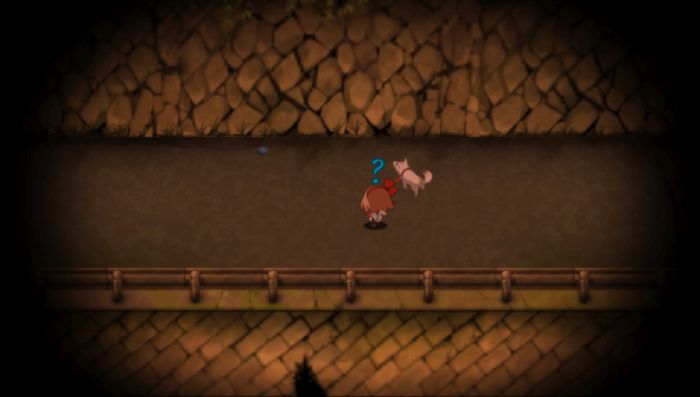 Or maybe it’s just coincidence. Hand spirit was there because where it appeared is near the tunnel that leads to the territory of its master, Mountain Spirit.

I was dumbfounded after tutorials guided to carry a certain item.

And I think tutorials of Yomawari: Night Alone made me be silent, they can’t compare to tutorials of the sequel, Yomawari: Midnight Shadows. They are voiceless bombshell!! 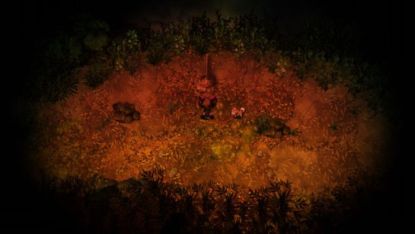 The plot of this sequel starts with the little girl named Yui (그イ) was carrying her black doggie, Kuro, and she also lead another brown puppie, Chaco, they go to the mountain to bury Kuro. And from her diary, it seems her precious dog died yesterday and she cried a lot. After she buried Kuro properly, tutorials started to guide player to control Yui while the story continued. She released red item from Chaco (at this point, this is the cutscene), so he ran and crossed the bridge near them, this made her follow him. When he jumped out of the bush that scared her, he walked to the bridge and waited for his owner to go with him. But tutorial taught how to use the first item that made me remember what happened in the first game.

However, nothing happened more than throwing rock to the bridge and the weight of Chaco, made the bridge fell… Chaco was still safe but this event separated both of them. So she needed to find another way. Tutorials is helpful by teaching how to push object (push big wooden box so she can cross the path. I started to be curious why the game made her walk to the path that is farther from where her doggie was waiting, but I just let it be, again I never suspect these tutorials. Or it’s because the beautiful and unique scenery in the game when Yui was walking attracted to me. And when Yui stood near the Jizo statue that is located along the way, this statue and beautiful scene made me not interested tutorials.

And when Yui passed “another item” along the way and reached the big tree at the end of the path, I doubt why the game needed to guide character to this point, she was supposed to find another way so she and her puppie can go back home (that time was evening).

Now, when I was watching Yui was looking up to the branch of that tree, that item behind her, and “the certain red item” she got from Chaco, a stupid idea came to me, but I tried to reject this idea immediately.

I mean, her dog, Chaco is waiting for her, so it’s impossible. I tried to think positively with all my might.

I was sure of that.

But tutorials would read my mind, they crushed my hope perfectly, maybe it’s Youkai. Because they didn’t teach how to carry item yet, so…

And after do as tutorials said again when the red exclamation mark popped up above Yui’s head, …great, she did what I had terrified.

And then, the scene changed… like that, it left me who was dumbfounded, question myself why something like this happened, but the story beyond this point made me relieve and confused at the same time. However, in the end, this game could deliver the despair for me and steal my heart.

The musics in the ending of these two Yomawari game series are so beautiful (especially in the sequel). If you can understand the story and listen to these musics, oh my god…

But please don’t forget that I want to warn you that tutorials of Yomawari: Night Alone and Yomawari: Midnight Shadows are very dangerous!! However, if you decide to play these games, I will not stop you, because stories and musics of these game are superb.

If you can endure it and keep moving, you can obtain happiness.

After you read my review, if you have some thought about Yomawari, feel free to write in ((Comment)) form below. I want to read every comments from readers because your opinion is important.

If you think this game review is worth enough to let others read this too, you can ((Share)) by using share buttons below. ⇓

Related Yomawari: Night Alone Posts you should not miss!

Yomawari: Night Alone (夜廻) Analysis: Chapter 2 – Why is Sis’s shoe in The School? (Part 1) And The True Face of Human-Faced Dog.
The Part 1 of this analysis.

...My daily meal is anime, manga, and LN in my bento, songs as my dessert and game as drinks. Do you want to subscribe my posts?... 1. For WP user, "follow button" besides me can serve you my free analysis with lightning speed. 2. For not WP user, your magic e-mail address can serve you as well.
Follow Yahari Bento on WordPress.com

Owner = Someone who works with owls, maybe.

The First Real Neat Blog Award in 2020 of Yahari Bento! 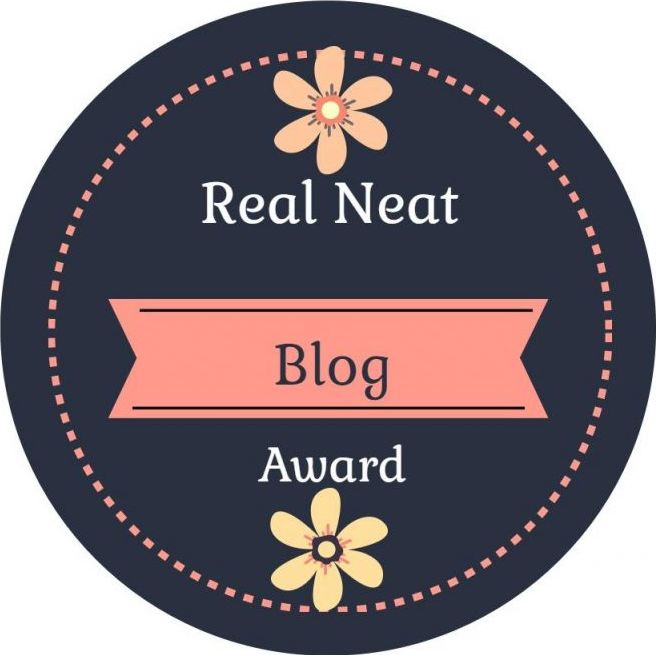 I am so blessed to be nominated for Real Neat Blog Award. This is the first time I got this award this year.

After Finn and Stamp performed the Fusion, “that form” is so different yet so similar.

I’m not kidding at all! They are closer than we thought. 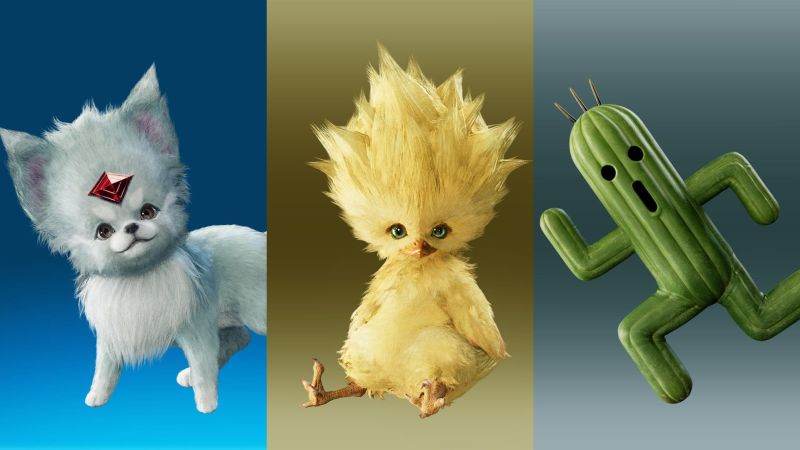 Now I shall reveal the mysterious of flower decors of The Leaf House & powerful summons!

But there are more HOT info from these two too!

The First Sunshine Blogger Award in 2020 of Yahari Bento!! 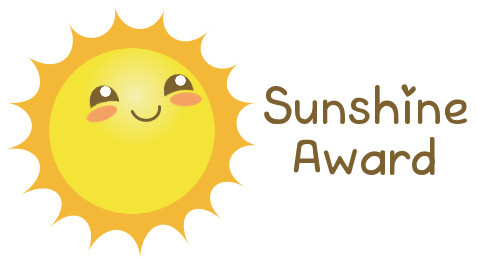 The brightest blog award in the year 2020 by my lovely blogger who nominates Yahari Bento for The Sunshine Blogger Award! I am late for responding Yomu‘s nomination but I will treasure it. Clannad anime is what I am interested and the review by Yomu is like the sunshine for me. Thank you so much for […]

OMG! Let me thank you (exclude myself) for following & liking my blog & always share your amazing ideas. \( ^0^)/